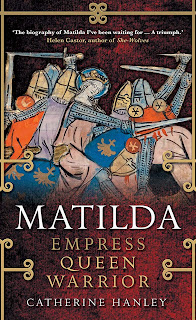 Empress Matilda: power-hungry, haughty, arrogant, stubborn … or so we were once told. Modern lines of thought have now questioned this, however, and in her new book Matilda:Empress, Queen, Warrior Catherine Hanley gives us a fresh perspective on this fascinating character, providing a much-needed in-depth look at the life of Matilda, heir to the English throne, and the events that unfolded as a result of her being named as such.

The book opens with Matilda’s epitaph: ‘Great by birth, greater by marriage, greatest in her offspring. Here lies the daughter, wife and mother of Henry.’ Hanley then sets the tone for the rest of the book as she takes a gendered approach and rightly points out that memorialising Matilda in a way such as this defines her by the men that surrounded her – her father, her husband, her son – and is rather disappointing for a woman such as she, who accomplished a great deal in her own right. Yet, sadly, it is also rather unsurprising.

The truth is that during this time women were defined by the men around them, though perhaps not solely. There were ideals and expectations for femininity and women (as there were for masculinity and men) and they did not include making your own mark on the world independent of the men around you. In fact, Hanley links this with the very crux of the issue surrounding Matilda.

Hanley makes an excellent point when she says that, on paper, there should not have been any issue regarding Matilda’s succession: she was of royal blood, the only legitimate child of the previous king, she was well-educated and had leadership experience and, perhaps most importantly, she had been named heir to the Crown by the king and the leading nobility had sworn oaths of fealty to her. If Matilda had been male, there would have been no question at all about her right to rule. However, she was not. And one of the primary concerns was that she was seeking to rule in her own right. There had been no precedent for this in England and, due to Matilda’s gender, it was deemed improper for her to actively pursue this for herself. As Hanley puts it, ‘it was impossible at the time not to view her situation through the lens of gender; she was not a person but a woman, and thus her ambitions became both unusual and unacceptable’.

Furthermore, Matilda went as far as to wage war in her pursuit to rule. And she was very much involved in the planning of her campaign, but this was a masculine ideal. Hanley noted that while it’s true women often took on more masculine roles in this period, it was only ever considered acceptable at this time when it was done on behalf of a man – a mother acting as queen regent, for example, or a wife overseeing the rule of her husband’s lands while he was away. As a result of this Matilda became condemned for her decisiveness in her campaign, her wartime leadership abilities and her authoritative manner – the very qualities she would have been praised for had she been a man.
This book therefore raises some interesting issues regarding gender and women in medieval England; however, at the same time it provides a much-needed biography of an often-overlooked person from our history, yet one who had a staggering impact upon it.

The book is generally chronological in structure, beginning with Matilda as a child and being sent away at the age of eight to marry the much older future Holy Roman Emperor Henry V. Hanley considers how hard this must have been for the young girl, but how very well she adapted to her new surroundings and later thrived in them. In fact, Hanley does a wonderful job throughout the book of really personalising the people she is writing about and making you think about how their situations affected them and their actions. This can be a hard thing to do with history. It can be easy to forget these were real people. Instead, Hanley makes us think how scary it must have been for an eight-year-old girl to be uprooted to a new country and culture and married to a stranger. Yes, this was common practice for medieval nobility, but it would nonetheless have been daunting. There are countless moments like this throughout the book where Hanley pauses to consider what a person may have been thinking or feeling, or contextualises the situation to help you understand their motivations better. The history she writes is more than an account of names, places and dates; it is brought to life. Furthermore, she breaks down complex issues (such as the Investiture Contest) and explains them clearly and concisely. This approach makes the book easy to follow for the casual reader, but it is also informative and original enough in its content and arguments for those with a more specialist interest. It strikes a perfect balance.

'Medieval England countenanced the reign of several underage boys and at least one lunatic – to say nothing of various men who were alleged to have been murderers, rapists, or both – but never of a woman.'

The narrative progresses throughout the next couple of chapters to discuss key events such as the disaster of the White Ship, Henry I’s succession dilemma, Emperor Henry’s death and Matilda’s return to court and, of course, his eventual naming of her as heir to the English throne and the oaths the barons swore to uphold this, including Stephen of Blois, future Stephen I.

Stephen’s usurpation of Matilda’s throne is covered in its own chapter. Hanley points out that a lot of this was luck on Stephen’s part: he was geographically closer than Matilda, meaning news of the king’s death reached him first, and he was also at a location where the shortest possible crossing of the Channel could be made, again granting him the benefits of additional time. It is possible that Stephen arrived in England as soon as one week after the king’s death.

Once news eventually reached Matilda she failed to make a swift departure to England, as Stephen had. Hanley looks at the significance of this and questions the reasons for it. She makes the fascinating conclusion that she was very likely with child at this point – possibly eight to twelve weeks. This is another instance where Hanley really breathes life back into these long-forgotten figures, for she discusses that if this were the case Matilda would have been in her first trimester – a peak time for sickness. A sea journey simply may have been too much for her to bear. With a frustrating inability to travel for the most female of reasons, Matilda’s gender had hindered her once more.

Later chapters continue to proceed broadly chronologically, deviating from time to time to discuss significant individuals (such as Robert of Gloucester, Geoffrey of Anjou and, of course, the future Henry II) and matters of importance concerning them. The events of 1141 are so numerous that Hanley devotes two chapters to it, dividing it by the initial good fortune Matilda’s campaign took in this year (the Siege of Lincoln Castle and Stephen’s capture), to the spiralling downturn it ultimately took. Hanley does an excellent job of telling a complex tale in an easy to follow yet informative manner.

The final two chapters (there are ten in total) look at Matilda’s son Henry, the peace discussions and Matilda’s later years as queen mother. The ultimate agreement that Matilda’s son would become king is an interesting one, and another fine example of Hanley personalising the people she is discussing. She considers how Matilda must have felt at Henry being ‘adopted’ by Stephen in order to be named his heir. While it made a degree of sense due to the legalities (as Stephen had a son, by rights the Crown should have passed to him, but if the king named Henry in his own right then this would have undermined Stephen’s own claim), Hanley emphasises how much of a blow this must have felt like to Matilda. Henry was her son. His claim was through her blood. Yet he was being publically portrayed as Stephen’s son. It was, as Hanley puts it, as if ‘Matilda was written out of her own story’.

In all, this is a fascinating and little-discussed period of history. Matilda was a remarkable woman – intelligent, regal and full of determination and strength of character. Hanley’s well-researched, superbly written biography of her is both sympathetic to Matilda, yet also notes her shortcomings and failures. The gendered approach she takes when considering certain aspects of her story feels both natural and necessary. Matilda’s gender simply was a factor in her story. And what a story it was.

Matilda: Empress, Queen, Warrior is available to purchase now. Click here to purchase a copy directly from the publisher's website.

Posted by The Medieval World at 7:49 am 5 comments:

All Comments
Tweets by @MedievalWorld