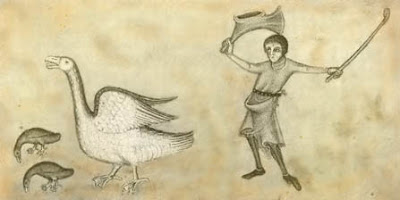 The effect that the preaching of the First Crusade had on people cannot be overly emphasised. Pope Urban II's speech had been electrifying, and news of this incredible new venture spread far and wide. The enthusiasm created for this new idea of a crusade was phenomenal. People had been whipped up into a mad frenzy of mass hysteria. A small glimpse of this can be seen when reading accounts of events at this time, some of which even describe a divinely blessed goose who almost led a crusading venture.


We hear of this goose in Albert of Aachen's (or Albert of Aix's) chronicle which also described the events of the Peoples Crusade, led by Peter the Hermit.
'There was also another abominable wickedness in this gathering of people on foot, who were stupid and insanely irresponsible, which, it cannot be doubted, is hateful to God and unbelievable to all the faithful. They claimed that a certain goose was inspired by the holy ghost, and a she-goat filled with no less than the same, and they had made these their leaders for this holy journey to Jerusalem; they even worshipped them excessively, and as the beasts directed their courses for them in their animal way many of the troops believed they were confirming it to be true according to the entire purpose of the spirit.' [1]


Guibert of Nogent recorded a similar event in his chronicle 'The Deeds of God Through the Franks'
'What I am about to say is ridiculous, but has been testified to by authors who are not ridiculous. A poor woman set out on the journey, when a goose, filled with I do not know what instructions, clearly exceeding the laws of her own dull nature, followed her. Lo, the rumour flying on Pegasean wings, filled the castles and cities with the news that even geese had been sent by God to liberate Jerusalem. Not only did they deny that this wretched woman was leading the goose, but said that the goose led her. At Cambrai they assert that, with people standing on all sides, the woman walked through the middle of the church to the alter, and the goose followed behind, in her footsteps, with no one urging it on. Soon after, we have learned, the goose died in Lorraine; she would certainly have gone more directly to Jerusalem if, the day before she set out, she had made herself a holiday meal for her mistress. We have attached this incident to the true history so that men may know that they have been warned against permitting Christian seriousness to be trivialized by vulgar fables.'[2]


There have been other similar accounts of this kind (see the chronicle by Fulcher of Chartres [3]). Whether these accounts are based on real events or not, that they were even recorded gives us an insight into the mindset of these people who were caught up in the whirlwind of the First Crusade. That people believed a goose had been blessed by the Holy Spirit and would lead them to Jerusalem, shows the mass hysteria conjured up by the preaching of the First Crusade.


[2] Guibert of Nogent, The Deeds of God Through the Franks, trans. by Robert Levine (Boydell and Brewer: 1997), p.156.
Available online at http://www.bu.edu/english/levine/guibprol.htm 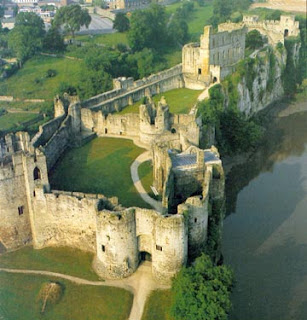 I went to visit Chepstow Castle over Easter, it really is a gorgeous place. It is in South Wales, Monmouthshire, which is near to the English border. The castle has Norman origins, and it’s believed it was constructed not long after the Battle of Hastings in 1066. The castle is mentioned in Domesday, which says it was built by William fitz Osbern. As Domesday was compiled in 1086, we know it was built some time between these dates. The Norman castle was much smaller than what remains today. Only the great tower survives from the castle’s Norman phase.
The outside of the great tower 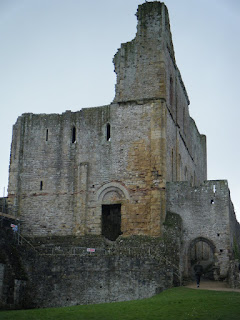 The interior. Note the blend of architectural styles in here, this reflects the many different phases of the castle throughout its long history. 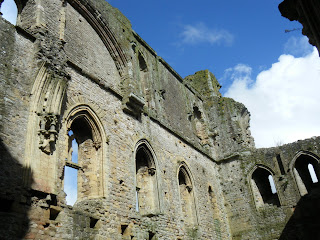 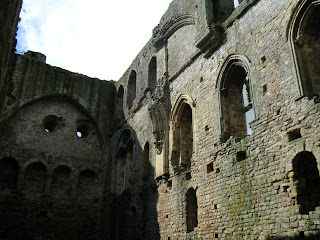 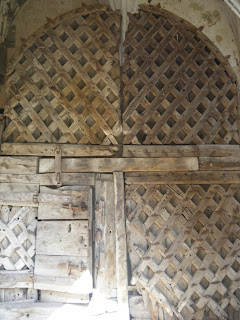 Chepstow Castle passed to the great medieval knight William Marshal (I’ll be doing a post about him soon!), through his marriage to Isabel of Clare in 1189. The pair of doors shown here (which were originally at the main gate) have recently been dated to the period of William Marshal. Through dendrochronology, it has been shown that these doors date form no later than the 1190s. This makes these beautiful and well crafted doors, possibly the oldest surviving castle doors in Europe. 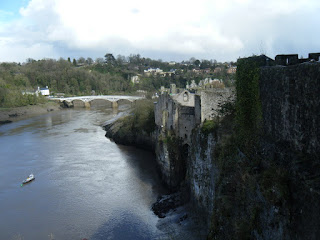 William Marshal constructed a revolutionary new gatehouse, the lower and middle bailey defences, along with other fortifications. After he died in 1219 Chepstow Castle passed to each of his five sons. Over this time much more work was done on the castle. Such as the addition of the upper barbican, and the remodelling of the great tower into a gorgeous hall and chamber. The castle is situated on the top of a cliff which is next to the river Wye. The Marshal brothers also greatly added to and extended the defences of this western side, making excellent use of its natural defensive position. 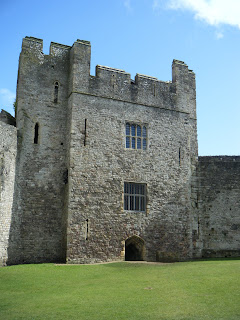 Roger Bigod, the fifth earl of Norfolk, gained the castle in 1270. He added a number of accommodation rooms and chambers, extended the upper level of the great tower, and also built Marten’s Tower (shown here).
By this time the castle had been significantly transformed from its early Norman phase, and continued to be passed to different lords throughout the years. If anyone gets a chance to go, this castle is well worth a visit! Here are a few more pictures of the gorgeous Chepstow Castle - I took far too many to post them all! :D
The main entrance 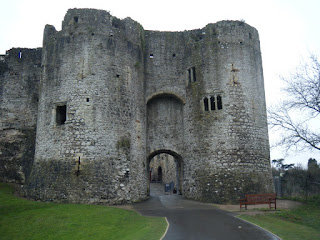 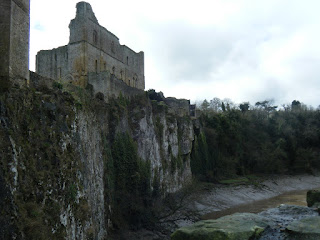 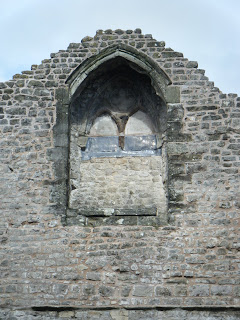 You can see the lower bailey through these arches 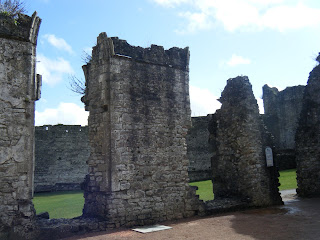 One of the towers added by William Marshal 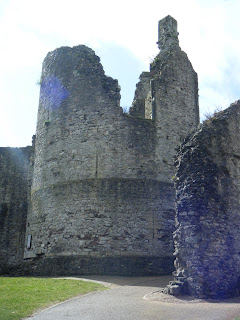 Remains of the 11C wall painting inside the great tower 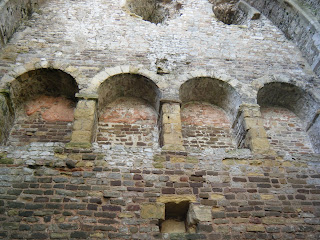 The gallery. A passage that runs alongside the great tower, connecting the upper and middle baileys (built late 13C) 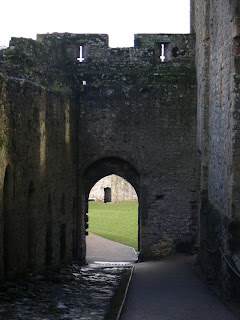 View from the gallery 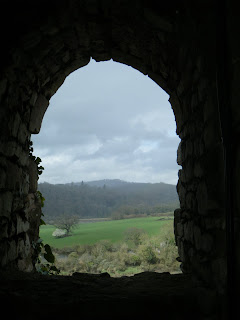 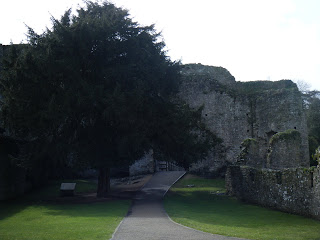 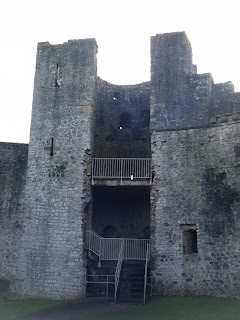 Walkway which looks down on the upper barbican 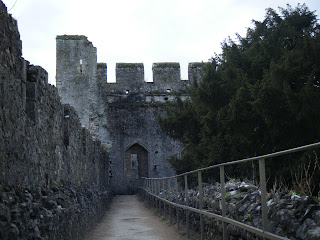 View from the walkway 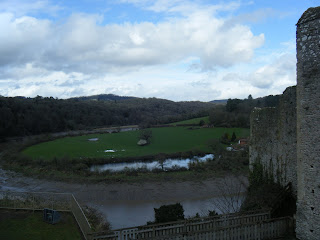 Beasts, Monsters, and the Kingdom of Prester John

So, I start a blog on the medieval world, but where to begin?! This period is utterly fascinating to me, there are just so many different things I'd like to look at - knights, castles, towns, fashion, literature, medicine, maps, crusading . . . I could go on forever! But in the end I decided to write my first blog on a subject that really caught my interest in the entire period: on beasts, monsters, and the Kingdom of Prester John. 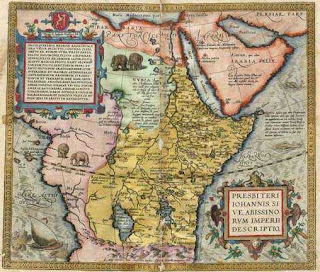 (Kingdom of Prester John)
Prester John was a legendary figure in the medieval period. There were rumours of a kingdom far away from Europe, located somewhere in the East with a Christian ruler. This ruler was Prester John. He was believed to have been a Nestorian and a descendant of one of the Three Magi (referred to in the Bible, and more commonly known today as the three wise men who visited Jesus at his birth).
In 1165 copies of a letter from this priest-king began to spread throughout Europe, originally written to the Byzantine emperor Manuel Comnenus. This gave a renewed spark to the legends of Prester John. However, the letter is known today to have been a forgery which originated from Western Europe. At a time of conflict and strife due to crusading, there was a hope that Prester John would go to the aid of the Christians in the West.
The fake letter described a utopian land overflowing with wealth and luxury. Also included were descriptions of some rather weird but wonderful inhabitants. These were creatures that people genuinely believed lived just beyond the realms of their own lives. Such beasts and monsters included: 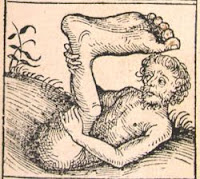 The Monopods. These were creatures with a giant foot. Also known as Sciapods, and Monocoli. In surviving imagery these creatures are often depicted as protecting themselves from the sun. 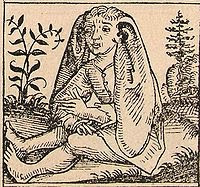 The Panotti were giant eared creatures 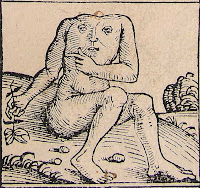 The Blemmyae. Headless people, with their face on their chest. 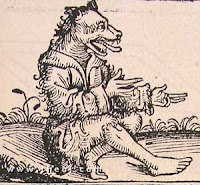 The Cynocephali were believed to be creatures with dog heads, who communicated by barking.
These creatures were described in Prester John's letter as living in his kingdom. They were also believed to have lived just on the outskirts of known and explored land. There are links of these beasts and monsters going back to classical Greek sources. Although, travel and exploration during the medieval period would most likely have encouraged these sorts of legends. At this time people encountered animals they had never seen before, or even dreamt of! Animals such as elephants, giraffes, camels and so on. Imagine just how strange these would have looked to a person who had only ever seen cows, pigs, goats, etc. People would have gone on these travels and when they returned home they would have described what they'd seen. How would you describe an elephant to someone who'd never seen one before? . . .
Sources:
Posted by The Medieval World at 2:13 pm 11 comments: