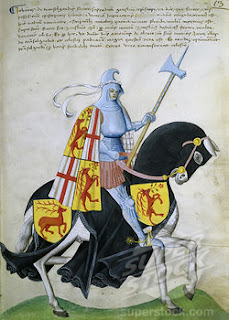 Whilst reading David Crouch's fabulous book Tournament I came across this superb source which I thought I would share. It is a poem written by Huon d'Oisy III, Castellan of Cambrai.
It is a fictional piece in which the author envisions a tournament at Lagny-sur Marne, that the noblewomen of his day organised and took part in whilst all the knights were away! Crouch dated the poem as having been composed between 1187-1189.


In that year that the knights were away

and the valiant did no feats of arms

the ladies went to tourney instead at Lagny.

The tournament was organised by

the countess of Vermandois and the lady of Coucy;

they said that they wanted to experience

the sort of strokes

that their lovers gave out for their sake.

Ladies from all over the place

organised it that each would

retain a household with her.

When they came to the meadows they got armed

then they mustered in front of Torcy.

Yolanda de Cailly went first on to the field;

Margaret d'Oisy was eager to joust with her;

When Margaret saw Yolanda back off,

She shouted 'Cambrai!' and grabbed the reins to drag her away;

Let anyone who saw it launch at her and prevent it!

Then Katherine with the eager face

began to marshal the lines

and to cry 'Move forward'.

So let those who are watching for her sign go forward,

pull at the reins, give and evade swordstrokes

and brandish their tall lances

cause iron to ring out

and pull mail hoods out from under helmets

and cause to break

Bringing up the rear come a great reinforcement,

Isabel, who comes to maintain the fight;

and she will have no mercy on them at all.

A squadron comes riding after her

with Adeline riding and shouting . . .

for the lady seneschal.

Very fine she looks, riding along the ranks.

The queen rides before all on an iron gray steed

armed with a mace and wearing a silver hauberk;

with no contradiction she carries it across the field;

Jehane comes riding up behind her

who has retained many a serjeant with her;

Isabel rides out and encounters

and forces her to offer pledge for ransom;

she is carried off with her

The countess of Champagne soon appears

riding on a Spanish dappled horse,

and she and her people ride gently into the fight;

everyone rides against her and mills around

and the fight there is very fierce.

More than a hundred attack her,

and Alice reaches out to grab her,

she and her company seize the countess's reins,

Alice - she of the noble body -

and the countess dismounts now she is taken,

and Yolanda is made a captive fairly,

she who is not proud and scornful,

as a German would be.

Isabel - whom we all know - gallops on to the field,

crying over and over again her war cry,

'Let's get them, Chatillon!'

A company rides up in ambush

and hems in Amice on every side,

and her lance breaks on a shield;

She cries 'Lille! Let's get their reins,

they're in our power!'

The countess of Clermont has been

struck by a mace across her abdomen,

right where her kidney is.

Clemence attacks heedlessly with her club

The whole company is routed and disperses in flight;

and no one stays to fight

when [Clemence] see Ida of Boulogne, the distinguished;

she rallies first on crossing a ditch,

she takes the countess by the reins,

and cries out 'God our help'.

The fighting there is very intense

Isabel of Marly rides up crying

'God our help!', and she gives and takes many cuts.

A company rides by the other side of the river;

pursues it across the fords.

Agnes de Triecoc rides up, who has sustained

many cuts to her arms that day,

she has broken many lances, and seized many reins,

she has hit out at many, and many times attacked.

There is no one

Marion de Juilly and makes her turn and dismount,

then she jousts at her

All passed across the river, Alice de Rolleiz,

jaunty of body, rides up with her company;

who has wondered into the middle of them;

The fair Alice falls on her with enthusiasm

and pursues them right into the middle of the town,

and sees coming there Agnes of Cressonessart;

because it was now growing late.

I have said and recounted a little,

and now I shall return to it;

they announced a tournament the next day.

You shall be told of the prowess of Yolanda.

When she had closed her helm

and urged forward her horse Morel,

she took her checkered shield,

hurling herself among the maidens in the meadows.

There were a hundred of them bearing lances;

she asked for no truce.

With no hesitation she rode to joust

right in amongst the other side.

far and wide and for a long time they have trumpeted

and serenaded what they witnessed.

She defeated and broke

all opposition on every side.

She set up her tent on the meadows outside Torcy;

she slept there, and gave away

whatever she had won.1 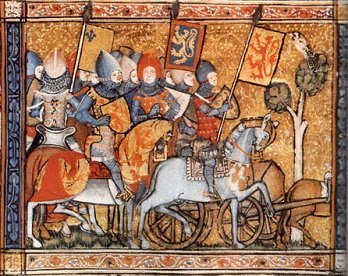 The old French epic known as Raoul of Cambrai, belongs to a genre of poems known as the chansons de geste (meaning 'songs of deeds' or 'songs of war'). Of the numerous chansons that survive today the majority of their manuscripts date from around the twelfth century. However it is highly likely that the poems themselves are much older and were preserved through oral history. 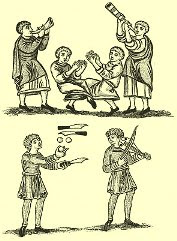 Entertainers called jongleurs would have sung or chanted the poems to a number of people. As they were written in the vernacular, this suggests that they would have been performed or read for the entertainment of a lay audience. Jongleurs also performed other forms of poetry, juggled, mimed, played instruments, and even did acrobatic tricks! They were often thought to be untrustworthy, and belonged to the lowest level of medieval society. As they relied upon the generosity of their audience for their pay, this would show that what they performed would have been the popular form of entertainment at that time. The chansons de geste in particular were highly popular.
Traditionally these epic poems have been arranged by their content into three main cycles. These are: the Cycle of the King, the Cycle of William of Orange, and the Cycle of Barons in Revolt (or revolting barons!). Raoul of Cambrai is a superb example from the last of these cycles.
The poem (along with many other chansons) is set during the reign of Louis IV of France, the son of Charlemagne. It weaves a tale of feudal ties and vengeance, which culminates in Raoul being killed by his vassal Bernier at the end of the first section. It would seem that the poem is most likely fictional, however it is possible that there are some historical links to it.


Despite the fact that Raoul of Cambrai is an epic poem and therefore some aspects would have been exaggerated, it is still a superb source for gaining an insight into the late twelfth century (the period in which the surviving version was written). One area in which it would be of use is to the study of knighthood. For example: 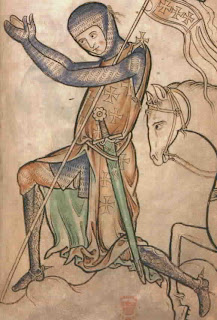 'On the next day the praiseworthy Count Raoul knighted Bernier and invested him with the best arms on which he could lay his hands. He put a strong well burnished hauberk on his back and laced a golden helmet on his head. Then he girded the sword with which he was knighted to his side and Bernier straight away mounted his good warhorse.
As soon as Bernier was mounted on his horse every one could see what a good knight he had become. He seized his gold banded shield and held the sharp lance with its pennon fastened by five golden nails in his hand. Then he charged forward on his horse and returned to his place again. There were many knights in the square and they said one to another: "How well he looks in his arms. Even if he is the son of an unwed mother, he must still be of rich and noble birth".' 1
This passage from Raoul of Cambrai tells us a great deal about the ceremony of knighting, and also ideals of being a good knight. For example, that care was taken to describe Bernier's extravagant equipment shows that this was a very important ceremony - and an occasion to be proud of. Due to the expense of this equipment it is also indicative of the growing association between knighthood and the nobility in this period, despite the fact that Bernier was a bastard. Weapons, armour and warhorses did not come cheap, and especially not the lavish examples described above!
This is just one example of the use of this fantastic source. The tale it tells can also help historians gain an insight into many other themes, such as: contemporary ideas about noble society, ideals of the family, the relationship between lords and vassals - the list could go on! And not only is this useful, but it also makes an excellent read!
1 'Raoul de Cambrai, An Old French Epic', trans. Jessie Crosland, revised by Richard Abels, USNA 1993 at
http://www.deremilitari.org/resources/sources/cambrai.htm
Sources Used: