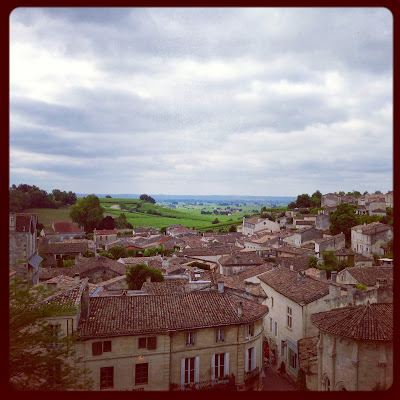 Whilst I was staying in Bordeaux I went on a little day trip to the nearby medieval town Saint-Émilion. For anybody else planning on doing this I would advise to not book one of the tours that run from Bordeaux, which are pretty steep at around €80. Instead, you can catch a local bus (I can't remember the number, sorry. Just ask in the Bordeaux tourist office) which runs twice a day each way in peak season. Then once you are there you have the freedom to wander around the town as you like, or you can choose from a selection of tours at tourist office in the town itself.


In 8C AD the town's population was still sufficiently small enough for a monk named Émilion to take up residence there in a hermitage carved into the rock. It was the monks who followed him that started the commercial production of wines from here, which the now UNESCO town became known for. If you choose to go on the monuments tour (which I highly recommend!) you will be taken to this hermitage. It is a very small cross-shaped cave which had restoration and extension work during the 17C. Inside there is Émilion's stone 'armchair' which was cut into the rock, and a small spring runs through near to the entrance. According to legend, this spring was originally located much further downhill, but miraculously moved in order to provide the hermit with some comfort!

Above from the hermitage is the Holy Trinity Chapel which dates to the 13C. The picture below is of the decorated vaulted ceiling. You're also taken to see this on the monuments tour. 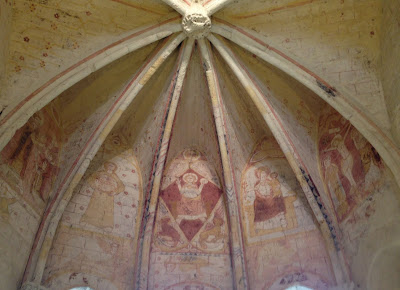 During the medieval period of the town (exact dating is unknown) a monolithic church was dug into the rock. At 38 metres long and 20 metres wide, it is the largest one of its kind in Europe. The picture to the right shows the 14C entrance which was made to replace an earlier more narrow one; you can also see the three story bell tower. The picture below is a close-up of the church's tympanum of the Last Judgement and the Resurrection of the Dead. 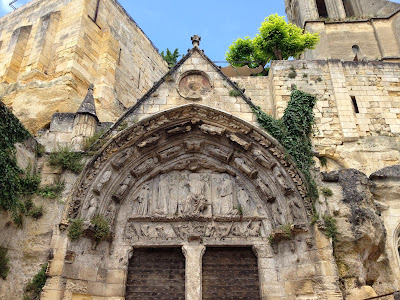 On the monuments tour you enter first through the catacombs, and then proceed through to the main church. I believe that the only way to visit the inside of the church, catacombs, and the hermitage is on the monuments tour which you book at the tourist office. The only downside was that no photographs were allowed. The inside of the church was really impressive. There are a few remnants of surviving frescos, and a wonderful low relief of what appeared to be a man, some sort of dragon, and a musician. It was well worth the visit! 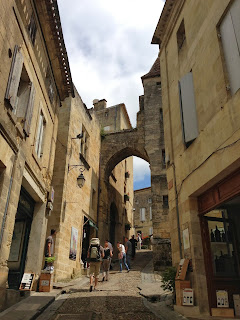 This is the Cadène Arch. It dates to the 13C and is located on the Rue de la Cadène. It was designed in order to monitor people moving from the different sections of the town. It also creates the perfect opportunity to have a little break from the trek up the massively steep hill by taking a photo or two!


This is another of Saint-Émilion's steep hills! I was told that the stones for some of the cobbled medieval streets arrived as a result of the wine trade with England. Wine was shipped over to Cornwall and then the barrels were weighted down for the return journey by pebbles and stones from the beaches. 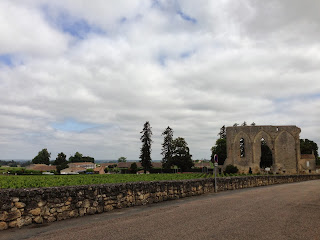 The Great Wall, not looking so great in my rather pitiful photo; apologies! It is the remains of a 13C Dominican convent.

I don't rally feel like I've captured the true charm of Saint-Émilion in these pictures. It was just the most spectacular place to visit! I felt like I was surrounded by history in every step that I took around the winding cobbled streets. As I said at the start of the post, if you are visiting the area I strongly recommend taking the time out to visit this completely beautiful town.
Posted by The Medieval World at 12:38 am 4 comments: