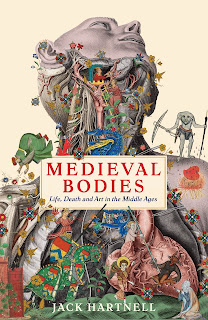 Medieval Bodies: Life Death and Art in the Middle Ages by Jack Hartnell

What was it like to live, thrive, suffer and die a thousand years ago? Jack Hartnell (@j_hartnell), Lecturer in Art History at the University of East Anglia, is here to tell us in this stunning new book from Wellcome Collection, an imprint of Profile Books. Medieval Bodies has been lovingly researched, thoughtfully laid out and beautifully presented in this impressive volume, which contains full-colour illustrations throughout that are both charming and gruesome in equal measure.

'This is the body in its very broadest sense, a jumping-off point for exploring all kinds of aspects of medieval life.'

Jack Hartnell has structured this wide-ranging topic as many medieval medical authors themselves did: through using the body's own form with a 'head to heel' approach. Proceeding down the body, piece by piece, chapter by chapter, Hartnell brings these bodies to life and uses them to explore a great many aspects of the medieval world they inhabited. From the headless Blemmyae with their face upon their chest, the 'tooth worm' believed to be responsible for dental pain, and medical diagrams of the skeleton, to the 'cheeky' game of La Main Chaude, wandering wombs, and world explorers. Medieval bodies, it turns out, are an utter delight. Who knew? Take a look and see for yourself how much of a joy they are and this book is to read in the following extract from pages 261–263 of the chapter Feet.

By the middle of 1493 the Holy Roman Emperor Friedrich III's left foot had turned almost completely black. His doctors had begun to worry some weeks earlier, when it first started slowly shifting from a healthy pink towards a shade of darkened blue. The late medieval compendia to which they might have turned for guidance spent little time on this final extremity of the body, only really discussing what to do in the case of surface issues such as boils, blisters or swellings. So in the absence of further advice the doctors were left to think instinctively. Some declared Friedrich was lacking humoral warmth and should be prescribed fiery medicaments to remedy the situation. Others insisted that the malady was down to the Emperor's near-constant consumption of melons, in which he apparently took excessive pleasure. Either way, something had to be done. A coterie of medics were assembled from far and wide to converge on the Autrian city of Linz, where the emperor was attempting to  convalesce and shake the creeping blackening of his limb. Friedrich's son, the future Emperor Maximilian, sent his Portuguese physician, Matteo Lupi. The monarch's brother-in-law, Duke Albrecht IV of Bayern-München, sent the Jewish surgeon Hans Seyff to Friedrich's bedside. And they were joined there by four more German physicians who had been summoned: Heinrich von Cologne, Heinz Pflaundorfer von Landshut, Erhard von Graz and Friedrich von Olmutz. After mulling over the Emperor, the learned group decided reluctantly that his worsening foot neccessitated medieval medicine's last resort: amputation.

What followed cannot have been pleasant. While some anaesthetic would probably have been made available to Friedrich – numbing plants and opiates, hemlock, poppy or meadowsweet, applied to a sponge or burned for inhalation – the repertoire of pain relief in the Middle Ages was minimal and not particularly effective. As the five physicians steadied the patient, Seyff and another surgeon, Larius von Passau, cut through the leg above the affected area, severing skin and soft flesh with sharp knives before sawing through what remained in order to remove the foot. They then applied powders to staunch the bleeding and bandages to keep the wound as clean as possible. One hopes for the patient's sake that the procedure was at least quick. It is hard to believe he underwent it with quite the grace shown in an image of the operation preserved in a manuscript in Vienna. Friedrich appears blank-faced and in a mood of drooping calm, sitting relaxed and stretched wide in Christ-like repose as the surgeons work away at the coal-black foot. The attending physicians are shown behind him daintily supporting his arms, although they were far more likely to have been pinning the struggling Emperor down as the saw's teeth worked its way through skin and muscle to the bone.

We know an unusual amount about this foot amputation because of an account written after the fact by the surgeon Seyff himself. Why exactly he felt compelled to put pen to paper is unclear. Perhaps it was the immense pressure of operating on an emperor in the presence of his personal doctors, as well as various lords, knights and barons of the court who, he anxiously notes, were also keenly observing. Perhaps the surgical narrative was intended as some sort of personal insurance for Seyff against his patient's yo-yoing condition: the operation to remove the foot went exactly as planned (success), but Friedrich still died some weeks later (failure). Or perhaps the account was designed to immortalise Seyff's encounter with the most revered body in the land. The personage of an emperor, like all other medieval rulers, was more impressive than any other in society. It was the head of the towering Body Politic, fed with distinct humoral diets and venerated after death even when split into different pieces in different places. But more than that, the blackened foot Seyff found himself holding was one of the emperor's most pivotal parts, a vital point of contact between the sovereign and his people.