Book Giveaway and Guest Post by Gareth Russell: ‘Gasping for comprehension’: The Plantagenet monarchy’s treatment of the Jews 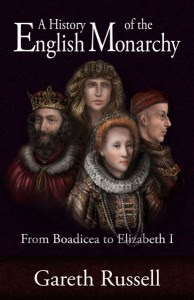 I am delighted to welcome Gareth Russell to The Medieval World today as he makes his fifth stop on a virtual book tour for the newly released A History of the English Monarchy.

In addition to a wonderful guest post by Gareth, MadeGlobal have several copies of  the book to give away! To be entered into a draw to win, leave a comment at the end of this post with your email address (so that you can be contacted), or email me directly at themedievalworld@hotmail.co.uk. Entries close on Friday 4 September, so be quick!

‘Gasping for comprehension’: The Plantagenet monarchy’s treatment of the Jews

While writing my latest book A History of the English Monarchy: From Boadicea to Elizabeth I, there were very few stories that affected me more than the Diaspora under Edward I. Between 1290 and 1656 there were no Jews in England – or, at least, none who could admit to it. In November 1290, Edward I had the entire Jewish community expelled from England in an event known as the Diaspora. Prior to this, Jews had no civil rights in thirteenth-century England; only Christians had rights in relation to their ruler. As a result, Anglo-Jewry existed as a unique legal class that was offered protection by the Sovereign but not by the letter of the law.

Unfortunately, royal protection was not always efficacious. Anti-Semitic riots had erupted during the festivities for Richard the Lionheart’s coronation in 1189 and King Richard was severely criticised by the clergy for allowing Jews who had been forced to convert to Christianity during the violence to return to their old religion. When Richard went on Crusade, the absence of their kingly protector left the Jews particularly vulnerable and massacres of local Jewish communities occurred at Stamford, Bury St Edmunds and Lynn. The Jewish community in Lincoln were granted sanctuary in the royal castle, but during the celebrations for Passover their co-religionists in York were not so lucky. They were surrounded in Clifford’s Tower by a baying mob who demanded that they either convert to Christianity or perish. Imitating the actions of the Jewish martyrs at the fortress of Masada in the first century AD, the Jews of York chose mass suicide over falling into the hands of their enemies. Those few who did not were butchered within minutes of leaving their place of shelter.

There were some medieval English Christians who objected to the persecution of the Jews. The Bishop of Lincoln criticised Simon de Montfort’s cruelty towards them during the reign of Henry III by reminding him that the Jews ‘are a wandering people [...] they are fugitives from their proper home, that is Jerusalem, they wander through uncertain stopping places and flee from fear of death’. But the majority of medieval Christians believed sympathy to be wasted on the non-believer. In 1234, Pope Gregory IX argued that there was strong theological justification for discriminating against the Jews, because the Gospel according to Saint John made it quite clear that the Jews were forever stained with the blood of Christ. Despite the fact that the Jewish community made up less than a quarter of a percent of the overall English population in the thirteenth century, anti-Semitism was widespread, as were stories of Jews participating in human sacrifice or the kidnapping and murder of Christian martyr-children. Christians, so it was claimed, were the real victims and it was their way of life that was being threatened.

In contrast to this consensus of clerical and popular paranoia, the English royal family struggled to define their policy towards the Jews on both a personal and political level. Queens were likely to be particularly familiar with high-ranking English Jews due to a levy known as the queens-gold, a tax that had originally been created by Henry I to supplement the income of his second wife, Adeliza of Louvain. It meant that an extra ten percent was added to any fine owed to the Crown by a Christian over the value of ten marks, as well as on any tax paid by the Jews.

However, in a climate of hatred, considerable popularity could be won by any sovereign who took a stand against the Jewish community. Shortly after his coronation, Edward I decreed that all Jews should be removed from any estates that had been granted to the Queen Mother in her widowhood. Eleanor of Provence had apparently made this request herself, since she did not want any contact with sin imperilling the salvation of her soul. This led to the eviction of Jewish communities in Marlborough, Gloucester, Worcester, Andover, Bath, Guildford and Cambridge. Later in the same year, Edward implemented that Statute of the Jewry, which forbade Christians to live near Jews, implemented a special new tax on every Jew above the age of twelve, restricted where Jews were allowed to live and, amongst other provisions, declared that when in public every Jew over the age of seven had to wear a yellow badge, known as the tabula, measuring six inches by three. In 1287 all Jews were expelled from English territory in Gascony and on 18 July 1290, the policy was extended to England. In the midst of the wedding celebrations for his daughter Mary, who was marrying the Duke of Brabant, King Edward issued a decree banishing all the Jews from his kingdom. They were given just over three months to pack up their lives and leave in time for the Feast of All Saints, which falls on the first day of November.

Some of those in the elite who had maintained relatively friendly relations with the Jews, like the King’s younger brother Edmund, his wife Queen Eleanor of Castile and the Archbishop of York, tried their best to secure safe passage out of England for their former associates. Desperate to prevent a triumphalist pogrom against the émigrés, Archbishop John le Romeyn of York threatened any Christian caught in his diocese molesting or harming the Jews as they left with excommunication. Prince Edmund managed to obtain a special license for a Jewish gentleman called Aaron fil Vives to sell his houses and rents in London, Canterbury and Oxford to Christians and Queen Eleanor begged Edward to grant Hagin fil Deulecresse, the Jewish Archpresbyter, a similar permit. He did so on the grounds that Hagin was ‘the Jew of his dearest consort Eleanor’.

The majority of English Jews were not so lucky. As one ship carrying the exiles sailed up the Thames, the captain claimed that his ship had run aground on a sandbank. To lighten the load as the vessel was re-floated, the Jewish passengers were allowed off to stretch their legs on the bank. Once they had disembarked, the captain and crew sailed away, leaving them to drown in the incoming tide. Those who survived the Diaspora of 1290 were scattered to the wind and Anglo-Jewish settlers were found in Amiens, Paris, Spain, northern Italy, Germany, and even as far afield as Cairo. A London scribe reflected that they had become ‘a fugitive people exiled from England for all time, always a wretched people to wander anywhere in the world’.

Reflecting on the importance of History is easy, but its applicability is an altogether more fraught concept. The expulsion of the Jews in 1290, with all the cruelty it showcased and the misery it entailed, certainly has an even more sinister appearance in light of the Holocaust of the twentieth century. That the Nazi Holocaust had nothing to do with Christian teaching should be obvious to all but the most zealous and disingenuous of Christianity’s critics. What happened in the 1940s was the result of a totalitarian political ideology and a perverted interpretation of evolutionary science. However, simply because Christianity’s fundamental teachings are the antithesis of the horrors found in Auschwitz does not mean that it is automatically innocent of nurturing the long-term European anti-Semitism that helped make Auschwitz or its sister camps possible.

For centuries, the Christian faith taught that Jews were not only inferior to Christians but also harmful – a tumour in the body politics. This was not a view unique to Catholicism. The diatribes of Martin Luther and the pogroms carried out by Russian peasants show that Protestantism and the Orthodox churches were just as capable of vicious hatred against Judaism. Jews were admittedly treated badly under the pagan Roman Empire and their religion was mocked, but so too were many other peoples of the empire, none of whom endured bitter persecution once the Roman Empire had vanished. Anti-Semitism as we know it was encouraged and hideously magnified by medieval Christianity and it is impossible to escape reaching that conclusion when examining the fate of the Jewish community in thirteenth-century England.

Medieval Christianity was an extraordinarily beautiful thing. It moulded some of the noblest minds in European history. Its capacity to move the faithful towards acts of courage, charity and compassion, the haunting beauty of its music, its art, the brilliant and subtle complexities of its theology, the men and women who sacrificed everything to live by its teachings, its cathedrals, built by thousands of hands over the course of generations, are proof of the devotion it inspired and the wonders it was capable of. In a violent age, it tried to promote values like chivalry, mercy and honour. It preached strongly against rape and canonised dozens of young women who had been its victims. And yet, it condoned and even celebrated the persecution of the Jews. In 1943, even as the Nazi Holocaust gathered its dread momentum, the historian Joshua Trachtenburg wrote that ‘the most vivid impression to be gained from a reading of medieval allusions to the Jews is of a hatred so vast and abysmal, so intense that it leaves one gasping for comprehension’. Perhaps, in the end, the Diaspora’s greatest lesson is not just of what was wrong with the thirteenth century or medieval religion, but a reminder, if ever one was needed, of man’s inhumanity to man, how readily he can justify it and the tragedies of the past.

Here's a description of the book from the publisher:

Be sure to take a look at Gareth's wonderful blog too, Confessions of a Ci-Devant

Remember that if you'd like to win your own copy of the book leave a comment below with your email. Good luck!