The Bearded Lady - The Legend of Saint Wilgefortis 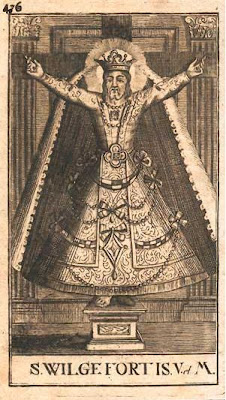 Wilgefortis was a young Christian noblewoman, the daughter of a pagan king (sometimes the King of Portugal). Her father had arranged a marriage for her to another pagan. Reluctant to enter into the marriage because of the vow of chastity she had taken, she prayed for God to make her repulsive to her future husband. Miraculously, when she awoke she discovered she'd sprouted a beard! The newly grown beard had the effect Wilgefortis had hoped for, and as a result the engagement was broken. Her father was rather less pleased with his daughter's actions, and the consequences of her new beard. He became enraged, and ultimately had her crucified. 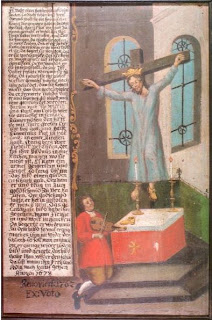 This legend is connected to a story that when a destitute fiddler played before her crucified body (or a statue of her) she gave him one of her golden boots. The fiddler was sentenced to death for the theft of her boot, but was granted his request to play before her for a second time. He did so, and in the presence of an audience she kicked off her other boot, thereby proving his innocence. Images of Wilgefortis often show her on the crucifix with one shoe off, and a fiddler playing at her feet. 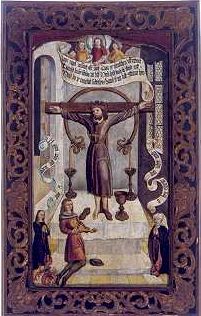 The legend of Saint Wilgefortis became quite popular during the medieval period, and her cult spread from around 1350. She was often invoked by women having marital problems with their troublesome husbands. There are different versions of the story from various places, and the saint is known by many names. In England she was known as Uncumber. In the Austrian version she was known as Kümmernis, which came from 'Kummer' meaning 'sorrow' or 'sadness'. Whilst in Italy and France she was known as Liberata, meaning 'liberator'.

Posted by The Medieval World at 8:13 pm